In my last post I promised some photos of some of my favourite of the show gardens. The first was the Hope on the Horizon garden built by Matt Keightley. I took loads of photos of this garden, it was very photogenic from almost any angle. 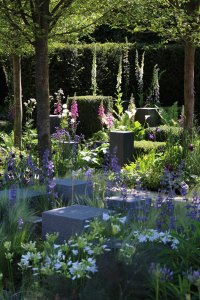 Hope on the Horizon

A number of injured soldiers (mostly from tours of Afghantistan) were being interviewed by local TV and radio. They clearly felt a connection with the garden, which is great because it will be dismantled and rebuilt at a Help for Heros centre in Colchester. The public have also enjoyed it as it was awarded the People’s Choice award for the favourite show garden. 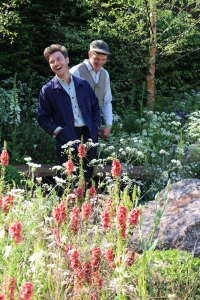 Above is Harry and David Rich, who’s Night Sky Garden’s naturalistic planting really hit a spot for me. 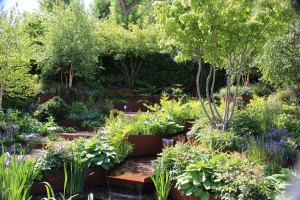 The Garden for First Touch

The Garden for First Touch was right up my street. I loved the rusted steel water courses. The garden was inspired by, and sponsered by, the St George’s Hospital charity, to highlight their neonatal work.

One of the gardens that really caught my eye was the House of Frasier fresh garden called Texture, that featured a pink furry antlers head, a pink coffee table covered in moss balls and a pretty combination of cottage garden favourites. 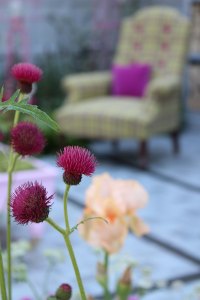 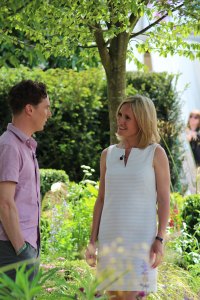 Apologies to my readers not in the UK if none of these names mean anything to you. So I might have missed some of the big stars, but not all of them. Oh no. I did manage to see Christopher Biggins. The poor guy was having to explain himself to somebody as to why he was not going to have his civil partnership changed to be a marriage now the rules have changed. I’d have told her it was none of her business… 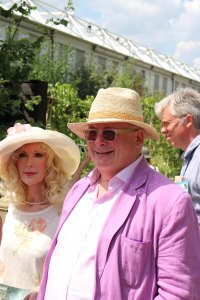 Susanna Reid was there, and really pleased the paparazzi by dancing with some guy who’s son she had been chatting too. 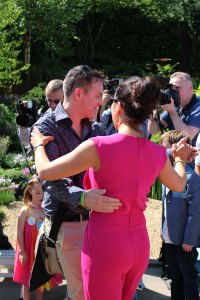 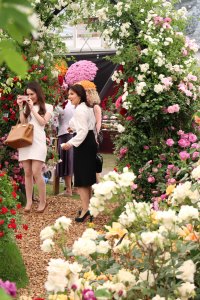 Arlene Phillips, and I guess her daughter.

Andy Murray’s wife Kim Sears was there, but I didn’t get a photo as it felt intrusive as she was on her own not with him, although I later see that thought didn’t occur to the Daily Mail photo editors. Kirsty Allsopp was there, as was Gary Kemp. I know it is a nice day out, especially if they have been given free tickets just for being famous, but many of them did seem genuinely interested in seeing the stands and the gardens. (I guess many of those I didn’t see were otherwise engaged in the hospitality tent). 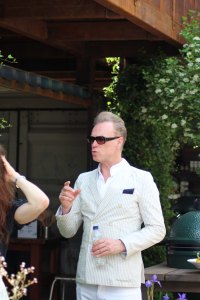 I could go on and on. I’ve spared you the photo of Lawrence Llewelyn-Bowen with his nose in a rose. I’ve also spared some of the gardening press who’s photos I took, but daren’t publish.

Some poor model dressed in only underwear was draped over the BrandAlly Renaissance garden, again surrounded by paps, but it seemed designed only to get themselves in the papers so I walked on by. I did however take a  picture of a different more tastefully dressed model on the World Vision upside down garden, because although the garden itself didn’t do it for me she looked so serene compared to the surroundings. 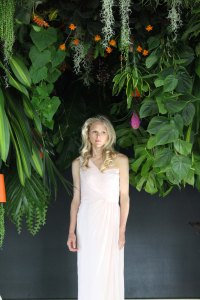 I’m an optimist, My theory is that it is better to say ‘yes’ then work out if things are possible afterwards. I feel that if you take this approach then you are more likely to come across interesting opportunities. You never know where it ultimately might lead you. Yesterday one led me to inside the RHS Chelsea Flower Show. It’s the first time I’ve been there; so armed with the new camera, a few lenses, suncream, hat and shades I hit the most prodigious flower show in the world.

We didn’t get there as early as we would have liked. Where we live the nearest we get to a traffic jam is when the road is too narrow for two tractors to pass, so we underestimated the time it would take to travel a mile in monday morning London traffic. But the showground was still very quiet when we got there at 08:50. Monday at Chelsea is reserved for press and ‘invited’ guests (which usually means celebrities). The celebs don’t start turning up until mid-late morning so it was nice to be able to get loads of different angles to the show gardens, without too many people about.

We started down main avenue where the real money is spent on creating kind of gardens that no doubt grace the homes of many a rich city type. Cleve West’s Paradise Garden was the first. I really like Cleve, and I nearly always love his gardens; I loved two thirds of his garden this year. He had an attractive sunken area in the centre, surrounded by some lovely cottage garden favourites. 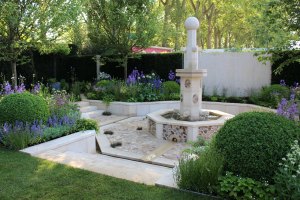 The only bit that I wasn’t so keen on was the dry bit at one end, which was used to link the garden into Persia, I’m not so much a fan of this style of garden so I could have been spared this bit and had more of the rest of the garden. I see it got a Gold medal, which goes to show that I don’t know what I am taking about, and looking back at the below photo It does kind-of work. 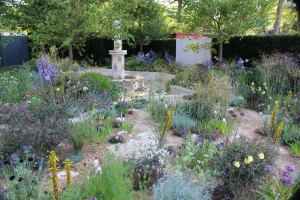 Reading the pre-show press I didn’t think I’d like the Telegraph garden with its lawn mown to within an cm of its life, box balls and huge trained lime trees, but it actually had plenty of planting to soften it. You’ve got to feel a bit sorry for these kind of gardens, they look their best when pristine, but the team spent all day picking up stray leaves and squeegeeing the stone slabs. 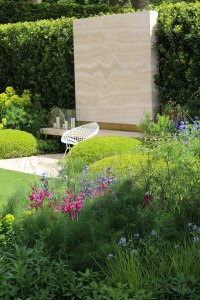 There were some lovely plants on the Cloudy Bay garden, but the light was too harsh for any of my close-ups to be much use. At one point we caught the judges coming off this garden, but as can be seen by Juliet Roberts (The editor of Gardens Illustrated) they are a shy bunch who don’t like their photos being taken. 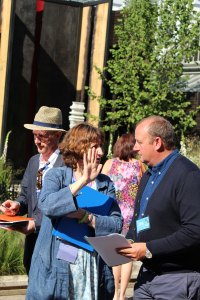 Don’t think you can pap me……

Somebody last autumn must have sold a job-lot of double aquilegia seeds and some thistle type plant, which I am reliably informed is called Cirsium rivulare, because a lot of gardens shared the same plants. I did manage to get a shot of a heavily laden bee feeding off one. This photo could have been taken on any one of a dozen gardens, but was actually from the Positively Stoke-on-Trent garden. 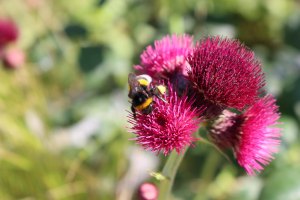 My favourite three of the big show gardens were The Garden for First Touch, which made nice use of rusted metal; the Hope on the Horizon garden, which had some; and The Night Sky Garden, which was created by two brothers who live quite close to us. I’ll post some photos of these soon.

There was a lovely bit off to the east of the main show gardens which is surrounded by trees and is where they put the Artisan gardens, three stood out which were: Togenkyo – A Paradise on Earth 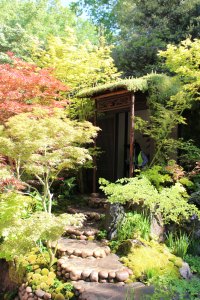 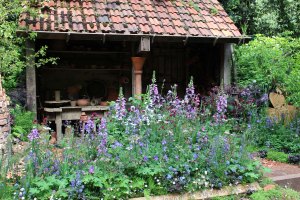 and The Topiarist’s Garden. Having looked today at the awards, it seems the judges agreed with us with the first two getting gold and the latter a silver-gilt. 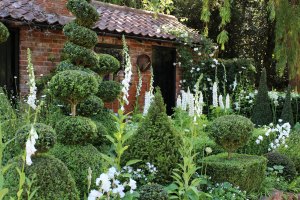 Once we had seen all the show gardens and grabbed some food we wandered round again looking at the floral Marquee and some of the exhibits. I liked the rose covered piano created by PollyFields, and the lavender covered elephant smelled lovely, although it must have taken months to make. 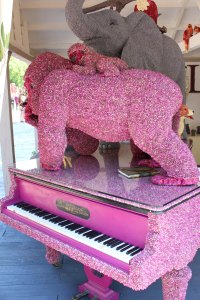 By this time many of the celebs were wandering about, more of which to come……

I have been really busy recently so haven’t had as much chance to write. I have also neglected quite a few of the new piano pieces I started, although I have been going over some of those I have already learnt to get them memorized. I will hopefully be playing in public again soon, so want to get more into my head.

Fortunately we had a bank holiday on Monday and I wasn’t working so I managed to do something I have wanted to do for some time. We got up at 04:00 and headed off to our local woods to listen to the dawn chorus. It was truly magical. A real treat The birds made a fantastic cacophony of all sorts of sounds. The other advantage of being in the woods when the sun rose was that the light was great for photographing at bluebells. 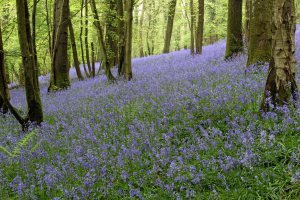 The woods near to us have a patch of bluebells that stretch for as far as you can see in every direction, and at the moment they are looking their best. The woods are also great for wild garlic, which we have been picking for a few weeks now, and are currently in full flower. 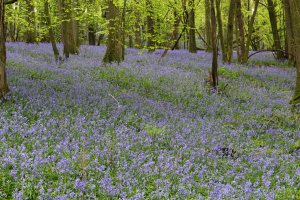 The Bluebells in our woods

The above shots were taken on the new camera on a tripod. I took a tripod (mine is lightweight) so that I could use the camera on ISO100, but knew that that would mean a long exposure time. The first image was a 5 second exposure at f22, and the second was 2 seconds at f20. I wanted a small aperture (f22 and f20 means a very narrow aperture) so that I had as long a depth of field as possible. Obviously with such long exposures there’s always the chance that any breeze would blur the flowers, but in this case the air was very still and anyway I wanted to see them all on mass so a slight blurring of the flowers wouldn’t have been a disaster.

I hope you like them, and if you do know of any near you, make sure you get out and get some photos. You really don’t need to bother with a tripod and and a 4 o’clock start…..

Some other great blogs