I am about to sign up for my final Open University module to allow be to qualify for my degree. I’m currently writing my 5th module, which will give me a total of 300 points. I have completed all the compulsory modules, so for the final module to gain the 60 points I need for the Honours degree I can chose any of the modules the OU offer. Here comes the dilemma I have been wrestling with.

They offer a course called ‘Earth Science’ which is all about geology, volcanoes and the study of the ground over the last 4.6 million years. This would be really interesting and would tie in with much of the other course. It would also be good because I tend to do well on the science based courses, because I like answers where there is a wrong/right answer. It also has an exam and again I have performed really well in the exams, and I am sure I’ll remember quite a bit from my A level Geography. This is the head choice.

There is another course called ‘Inside Music’. This course takes you through lots of different styles of music, such as Gamelan and Indian Ragas. A big part of the course is composition, and they even supply you with Sibelius software, which is not cheap! I quite fancy this one because the one downside to doing the degree is that I have neglected the piano somewhat. So doing this module I would have legitimate excuse for playing. In fact I would need to keep playing it. This is the heart choice. The one thing that slightly puts me off this course is having to write essays about Mozart’s music style or Beethoven.

In most things in life I like to think that my heart rules my head, but in this case I’m not so sure……

If you are not familiar with Gamelan music here is a little taster. 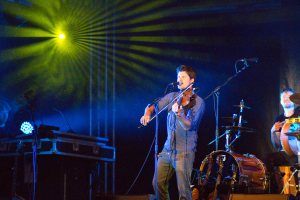 I love a freebie. Who doesn’t? We recently got to see Seth Lakeman for FREE! Which given that we happily pay money to see him perform fairly regularly anyway, I was very chuffed about. The town of Monmouth, which isn’t too far from us puts on a free music festival every year. This year they booked Seth Lakeman, which is quite a coup. If you haven’t heard any of Seth’s work I’d really recommend you look it up. He’s also very easy on the eye.

His brother Sean, who normally plays guitar wasn’t there so he had another guy called Jack Rutter playing with him, and he played a mean harmonica, as well as guitar. I don’t normally like a harmonica, I have a healthy distrust of harmonica players, they never seem to be very far from their cherished instruments, and always a bit too keen to play them. But in the right mouth they can really enhance a tune.

Another person who was playing with him was Lisbee Stainton. I must admit i’d never heard of her before, but she is actually a regular in his band now, as well as being a solo artist in her own right. Apparently she lives pretty close to us, and she has a great voice as well as playing a number of instruments. 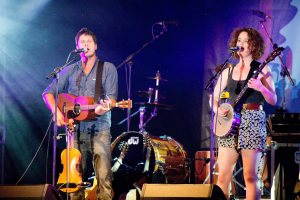 I’m definitely going to look up her solo work.

P.S What do you think of the photos? They were taken on a telephoto lens at 300mm and it was pitch dark for us (being 10pm)

Some other great blogs